In the Public Consultation survey last year over 70% of those who responded believed there was a need for better cycleways in and around Stanford. Many mentioned the need for a safe cycle route from Stanford to Faringdon and Wantage. The A417 is a barrier to cycling around the village and is likely to get busier with more development in the area. The NPSC has produced an outline plan for a segregated cycleway from Stanford to the A420 Stanford Road roundabout at Faringdon. It has also looked at options for expanding to route from Stanford to link up with Park Lane which would give access to Charney Bassett, Goosey, Denchworth and, via Grove, to Wantage. 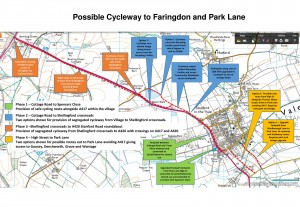 The cycleway to Faringdon is proposed in three phases:-

Access from the High Street to Park Lane is a more difficult issue The pavement along the A417 is too narrow and dangerous for cycling. It also runs out at Stanford Mill before the bridge. If we can access Park Lane there is a relatively safe route via Milliway/Cow Lane, Denchworth and Grove to Wantage, avoiding the A417. Two options have been suggested between the High Street and Park Lane. Both would be subject to landowners’ consent.

Overall feedback to the proposal at the Drop-In Session was highly positive.

If you would like to comment on this idea or can help in developing it into a more firm proposal please e-mail info@sitvnp.com

We all want to protect and enhance what is good about our Parish of Stanford in the Vale, improve facilities and services and have a positive influence on future development. A Neighbourhood Plan (NP) is an important way to do this.

It will carry real weight in future planning matters. It can help direct where new homes, shops, offices, leisure facilities, schools and other development should be built and what they should look like.

To learn more about NPs check out the tabs above. You can also see what the VoWH Planning Officers told us under the FAQ tab (Frequently Asked Questions), Follow Us on Twitter for Latest News or Announcements and get in touch via our Contact page.